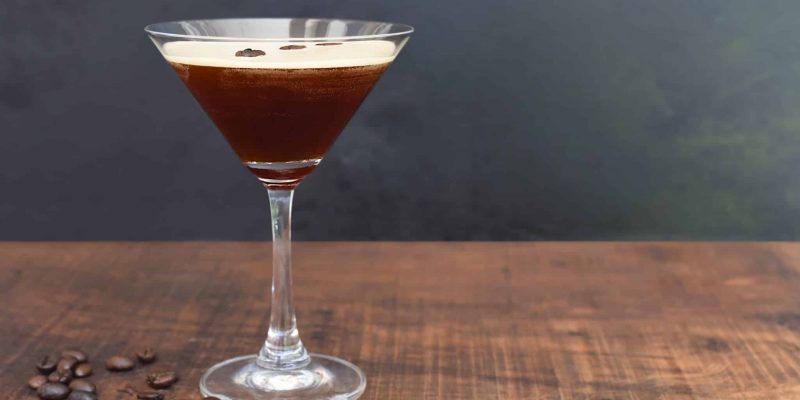 How Much Caffeine Is in an Espresso Martini?

You may have noticed lately that there’s a “new” cocktail on the scene—the espresso martini. And while it may be novel to you, it’s by no means a newcomer. In fact, the espresso martini has been a thing since the 1980s. It was the cocktail for fashionable, hip bargoers in the 1990s and then somewhat disappeared as quickly as it appeared.

This special martini packs a lovely punch, both with caffeine and vodka. But how much caffeine is in an espresso martini, and what can you expect when you order one? Espresso itself has about 60mg, but manufacturers sometimes use cold brew or only coffee flavor, and if coffee liqueur is added, it will add to the caffeine. But let’s take a deep dive into this special martini and why it’s all the rage…again.

But First, The History

Espresso martinis were made famous after a supermodel challenged a London bartender in the 1980s to make her a drink that would wake her up and mess her up. Who knows how the bartender came to this little caffeinated martini wonder, but his invention worked so well, the espresso martini became an instant classic cocktail.

Our guess is the mixologist was inspired by the famous San Francisco Irish Coffee, brought to America in 1952. Legend has it that the original Irish Coffee was crafted in 1943, not by a bartender but by an airport chef in Limerick, Ireland.

According to San Francisco Travel, Joe Sheridan created the beverage after a plane full of passengers was grounded due to a storm. It was a hit, so when Sheridan changed jobs to a different airport, he took his concoction with him. “Travel writer Stanton Delaplane tasted it there, and one night Buena Vista Cafe owner Jack Koeppler convinced him they needed to figure out how to make a San Francisco version,” says the publication.

Now, perhaps the bartender wanted to wow the supermodel, modernizing an old-fashioned, traditional coffee drink with something a bit more sophisticated. Irish Coffee is prepared with coffee, sugar cubes, whiskey and whipped cream. Not exactly supermodel fare. But the classic espresso cocktail offers the same punch kick without all of the calories.

What’s in an Espresso Martini?

Made with espresso or cold brew coffee, vodka and coffee liqueur, the espresso martini is slightly less of a sugar bomb but still delivers on strength and flavor. You get the buzz two ways: caffeine and vodka. How much caffeine is in an espresso martini? Typically about 60 mg (most espresso martinis contain one shot, or one ounce, of coffee), but some cocktails have cold brew, cold brew concentrate (which is stronger than cold brew) or plain coffee, which has about half of the caffeine found in espresso.

And because of that caffeine, it’s a buzz that lasts longer than the typical spirits-based drink. It’s the perfect selection when you’re planning a late night, although espresso martinis are also a popular morning and midday pick-me-up. You’ll often find them on brunch menus as much as bar menus.

Caffeine and Alcohol: Is the Combo Safe?

The jump from Irish Coffee to the espresso martini wasn’t the final transition of caffeine and alcohol cocktails. Just as fashion trends are hot one day, cold the next, and then often re-emerge decades later, some cocktails share the same journey. As popular as the espresso martini was in the 1990s, people moved on, and the coffee martini all but disappeared from the bar scene.

Make no mistake, consumers still wanted that fun formula of caffeine + alcohol, but around 1999, there was a shiny new toy that offered even more caffeine, plus a whole lot of sweetness. Red Bull energy was new to the U.S. market, after finding huge success in its home country of Austria. And just like with the Irish Coffee, a bartender in San Francisco is credited to creating a new cocktail, the Red Bull Vodka.

By 2021, Red Bull Vodka was at every bar, but its meteoric rise didn’t last long. The CDC warned against mixing high-caffeine energy drinks with alcohol, saying, “When alcohol is mixed with caffeine, the caffeine can mask the depressant effects of alcohol, making drinkers feel more alert than they would otherwise. As a result, they may drink more alcohol and become more impaired than they realize, increasing the risk of alcohol-attributable harms.”

But before you jump to the conclusion that caffeinated coffee, the base for an espresso martini, is dangerous to mix with alcohol, let’s take a closer look. The CDC is quick to qualify their warning with contextual information, saying, “Energy drinks typically contain caffeine, plant-based stimulants, simple sugars, and other additives.” And in November 2010, the FDA went so far as to advise seven caffeinated alcoholic beverage manufacturers to discontinue sales.

Coffee brewed from roasted coffee beans is natural and does not contain added stimulants, sugar and other additives that can enhance energy and the effects of caffeine, such as taurine, guarana, pyridoxine HCl and Vitamin B12. The CDC and FDA do not place coffee in the same category as energy drinks and, therefore, does not warn against drinking coffee-based cocktails.

The Re-Emergence of Espresso Martinis—Now in Cans

Once the Red Bull Vodkas lost favor, it opened the door for a more mature and safe caffeine drink to fill the void. After all, people still wanted the dual buzz but perhaps without all of the sugar and risks. With no new inventions that stuck and the general trendiness of coffee culture, the espresso martini began to resurface. Today, you’ll find the espresso martini on the signature cocktail menus at some of the finest bars and restaurants, and now, you can find them in cans, thanks to the rise of the ready-to-drink cocktails.

You heard that right: canned espresso martinis are one of the hottest ready-to-drink cocktails on the market. One even won Best in Class for the Classic RTD Cocktail category at the prestigious San Francisco World Spirits Competition, the most significant spirits competition in the world. And if you’ve learned anything so far, you know San Francisco is home to some of the best cocktails in the world.

Related: A Look at the Current Cocktail in a Can Market

Consumers may still enjoy hard seltzers, but there is a stark difference between an award-winning canned espresso martini and a hard seltzer. Most hard seltzers are made with malt liquor, not distilled spirits like vodka, carbonated water, sugar, and natural and artificial flavors. High-quality espresso martinis are made with 100% Arabica cold brew coffee or espresso, distilled vodka, and premium coffee liqueur. No artificial ingredients, carbonated water or flavorings.

You get a bar-quality cocktail that just happens to come in a convenient can the size of a standard martini. All you have to do is chill, shake and pour. Shaking the martini in a cocktail shaker of ice produces a beautiful, frothy foam head when poured into a chilled martini or coupe glass. That foam head provides the perfect support to suspend a garnish of crushed or a few whole coffee beans.

How Much Caffeine Is in a Canned Espresso Martini?

Canned espresso martinis contain the same caffeine as their bar-made counterparts, anywhere from about 30mg to over 150mg of caffeine, depending on the type, brew and amount of coffee the manufacturer uses. Be sure to read the labels. While many canned espresso martinis are award-worthy, there are some with questionable ingredients similar to those often in energy drinks and hard seltzers.

One of the questions that comes up with espresso martinis is whether all that caffeine keeps you up at night. It really depends on your caffeine tolerance, but remember, you’re not getting a full cup of coffee in a martini glass. Depending on the manufacturer, you may be getting the caffeine equivalent of 6oz of black coffee, or 1.25oz of espresso, all in a 3.4oz can.

With only about an ounce of coffee in the standard espresso martini, that’s about 60mg of caffeine if the cocktail contains a shot of espresso. But many bars and RTD manufacturers prefer to use cold brew coffee (sometimes a concentrate) instead since the martini is served cold. It’s much easier to stock cold brew that lasts for a week than to constantly make and chill fresh espresso.

With only three simple ingredients in the most authentic canned espresso martinis, you don’t have to worry about what you’re putting into your body. You can just enjoy the smooth, creamy, delicious “spiked” coffee and the lasting buzz it provides.

How Much Alcohol Is in an Espresso Martini?

You may have wondered about the caffeine content in an espresso martini, but are you curious about the alcohol content? Depending on the brand, you will find anywhere from one ounce of vodka to two ounces. The espresso martini that won the award contains 1 ⅔ ounces of vodka, plus ¾ ounce of coffee liqueur, bringing it to 22.5% alcohol by volume (ABV), or 45 proof.

This brings up an important point: liqueurs also contain a significant amount of alcohol by themselves. MasterClass explains, “Most liquor is in the 40 to 55 percent ABV, or 80 to 110 proof. Liqueurs typically contain more ingredients, so the alcohol content is generally lower, from 15 to 30 percent ABV or 30 to 60 proof.”

Compare that with the 5% average ABV of beer and hard seltzers. Wine is a bit closer in alcohol content, with an average of 12% ABV. As you can see, the espresso martini is potent, and if you buy the right canned espresso martini, you’ll get the same proportions and full-strength version as the ones made in a bar. If the can label says its ABV is much less than 22%, choose another brand that doesn’t dilute its strength.

If you’ve never ordered an espresso martini at a bar or restaurant, give it a try. Better yet, buy a canned espresso martini to try at home. There are a few canned versions available, but if you want to start with the award-winning brand, go with Post Meridiem. Order online or find them in a liquor store near you.