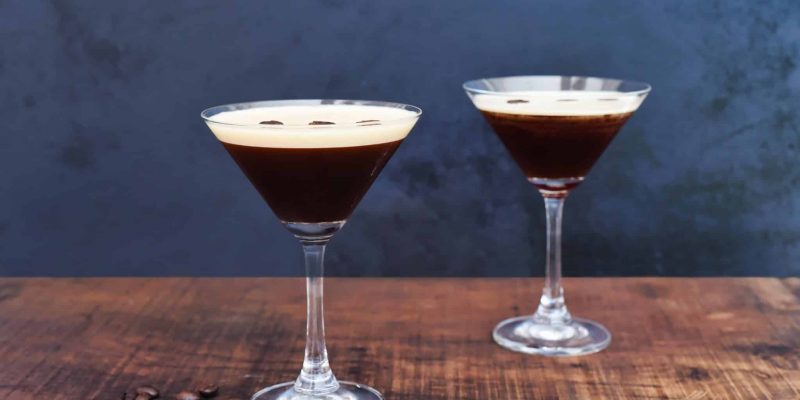 The Espresso Martini: A Comeback Story

It’s the mid-90s. You walk into your favorite late-night venue and crave something more than a beer or a basic cocktail. You and your friends walk up to the bar, and what do you order?

An espresso martini, You look around and notice you’re not the only one sipping on the beautiful cocktail.

Espresso martinis were the bar drink in the 90s, perhaps replacing its predecessor, the Irish Coffee, which seemed way less sophisticated. A mix of coffee and vodka, espresso martinis were mature and refined drinks with a kick. Bars across the country served sleek martini glasses filled with noir liquid, topped with a light foam that only shaken-not-stirred can create, suspending three delicate coffee beans as its signature.

And then, they were gone, at least for the most part. The espresso martini faded from the social scene, clearing the way for the more aggressive vodka Redbull to take center stage. Save for the occasional nostalgic bargoer, the espresso martini stayed back in the 90s with tube tops and acid-washed low-rise jeans until recent years.

The espresso martini goes back further than the 1990s, however. It was actually created in the 1980s. A bartender in the chic Soho scene claims the concoction as his own invention. According to legend, Dick Bradsell whipped up a mixture of coffee, sugar, and liquor to satisfy the demands of an unnamed supermodel who asked for a drink to “Wake me up and f*ck me up.”

And thus, the espresso martini was born.

From there, the drink spread around the world. British bartenders became would-be disciples of Bradsell, bringing the drink to bar scenes far and wide.

When even Forbes has something to say, it’s impossible not to take notice. In 2022, the publication officially declared a time to celebrate the return of the espresso martini. In fact, if you showed up for a welcome-back party, you’d be in good company.

Those of drinking age in Australia may argue that the drink never went out of fashion. A culture that takes both its cocktails and its coffee seriously, the espresso martini found love at first sip down under. It still tops lists for the most popular cocktail in the country, the drink is equally at home in a sports bar as it is in a high-class restaurant, and everywhere in between.

Now, the US is catching up. Due partly to pandemic restrictions, bartenders took to platforms like TikTok and Instagram to share their concoctions, and the espresso martini returned to the scene. Ever-photogenic and easy to make with only a few ingredients, novice mixologists followed the inspiration and began to try their hand at making their own.

There’s no denying social media’s impact on the espresso martini, especially during the pandemic period when attention was heightened. But what has kept this specific cocktail on the minds and lips of those of drinking age? It could be as simple as a cultural union.

The espresso martini appeals to two niche groups: those who love coffee and those who love a tasty cocktail. Even people who claim not to like a morning cup of coffee say they make an exception when it comes to an espresso martini. As high-quality coffee has found its way into ice cream, protein shakes, and even gum and barbecue seasoning, it only makes sense that this classic cocktail would reenter the scene.

While clientele may be happy to see an espresso machine at their favorite bar or restaurant, not every bartender is as thrilled. Making an espresso martini is a relatively time-consuming task, particularly if serving the first one inspires many others to order a round.

Pulling espresso shots for each drink can slow things down, and many bars don’t keep coffee on hand, so some bartenders turn down requests for espresso martinis. That said, others have taken it upon themselves to get creative, crafting their own signature espresso martini, finding it an opportunity to get clever with a classic.

Of course, no venue wants to turn customers away for lack of an espresso machine or desire to go through the motions to create a cocktail. That’s where ready-to-drink espresso martinis come to save the day.

Canned espresso martinis make whipping up an order faster than most cocktails, and customers are none the wiser. By popping open a can and shaking with ice, bartenders can easily make a drink on demand without the hassle. Some restaurants have been known to brew coffee in advance or even substitute cold brew coffee for espresso to save time, which goes to waste if the orders don’t come in. With canned cocktails, waste becomes a thing of the past, saving both time and money.

Not only does the espresso martini appeal to these two lasing cultures, but it’s a drink with both form and function. It is beautifully served in a chilled coup or martini glass, but the mix of coffee taste, caffeine boost, and social sipping make it a perfect combination.

Espresso martinis have a crowd all day long, too, adding to the allure. A late-morning brunch moves from lattes to martinis. Lunch wraps nicely with a coffee-flavored toast to the day. Dinner crowds aiming to keep the night going when the meal finishes benefit from a little caffeinated punch to round things out. Consider the espresso martini the Irish Coffee for a new generation (or even the new-age vodka Redbull), and you’ll understand the Millennial embrace.

Just as master mixologists are proud of their craft, beginner (domestic) bartenders are thrilled for a chance to impress their guests. The espresso martini is a popular and somewhat unexpected choice for dinner parties or hosting friends. Creating the drink feels more like a creative ritual as hosts brew strong coffee and fill beautiful glasses.

Of course, the overwhelm can feature heavily even for home entertaining. Keeping up with orders, brews, and the assembly line can bring anxiety for hosts eager to entertain their friends. Thankfully, the canned espresso martini is as good as the ones you’d find at a premium bar.

Ready-to-drink cocktails help home bartenders create beautiful cocktails without missing out on time with their guests. Pre-mixed, minimal-assembly-required drinks offer the ease of pouring into a beautiful glass and topping with the signature three coffee beans without the hassle (and mess) of brewing and cooling espresso shots. Not only does this save time during the party, but cuts a lot of clean-up at the end of the night!

Variations on the Classic

Of course, hosts may wish to try their hand at their own innovations to wow their guests. Serving ready-to-drink espresso martinis doesn’t mean remaining limited to the classic concoction. Cutting out the brewing and mixing step by keeping canned premixed martinis means leaving more time and space for trying some surprising twists. Here are a few of our favorites:

The bartender becomes the barista with a little bit of creativity. After all, your local coffee shop serves up coffee in various ways. Try offering guests the same opportunity to customize their drinks to make them sweeter, milkier, or even spicier with additions like cinnamon, nutmeg, or cardamon, using the base of a canned espresso martini made with high-quality ingredients.

The desire to keep the spirits high with, well, spirits has been through many iterations. From the espresso martini to the vodka Redbull and even the now infamous case of Four Loko, revelers have been looking to boost their energy while enjoying a beverage in many different iterations.

The controversy over Four Loko reached a head in 2010 when the beverage maker agreed to remove added caffeine and other stimulants from their products. In a landmark decision, the US government stated that beverage manufacturers could add alcohol or caffeine to their products, but not both.

Luckily for ready-to-drink cocktail lovers, naturally occurring caffeine is exempt from this ruling. That means options like Post Meridiem’s Espresso Martini endure as crowd favorites. With 100% Arabica cold-brewed coffee, vodka, and coffee liqueur, our martinis are equally at home in the hands of a barista or a bartender.

Post Meridiem uses only the best ingredients made with heart and expertise to save you time without sacrificing the experience. Whether your guests are transported to the espresso martini hey-days with each sip or are experiencing the richness of this signature cocktail for the first time, you’re guaranteed a memorable party.