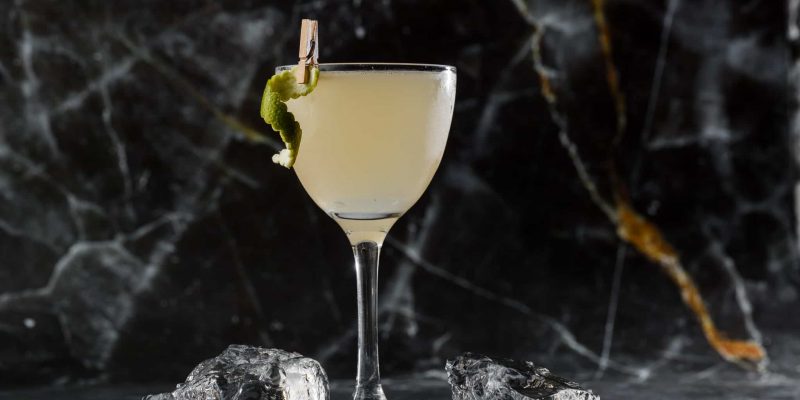 What’s a Vodka Gimlet Made Of?

In his famous 1953 Novel “The Long Goodbye,” author Raymond Chandler wrote the following passage regarding the gimlet:

“We sat in a corner of the bar at Victor’s and drank gimlets. “They don’t know how to make them here,” he said. “What they call a gimlet is just some lime or lemon juice and gin with a dash of sugar and bitters. A real gimlet is half gin and half Rose’s Lime Juice and nothing else. It beats martinis hollow.”

While the gin gimlet has a deep and storied history, you don’t have to go back in time to enjoy this ice-cold cocktail. In fact, modern mixologists have taken the basic gimlet and put a spin on it by using vodka rather than gin. Let’s take a look at the history of the gimlet, as well as dive deep into the cocktail’s modern, vodka-centric iteration in an attempt to answer the following questions:

The History of the Vodka Gimlet

Before we dive into the vodka gimlet and its surging popularity, let’s take a look at where the gimlet came from according to Chilled Magazine.

The year is 1880. The British Navy maintains the largest fleet of seafaring vessels in the world. Ships need sailors, and in the 19th century, those sailors had to be aware of some very specific healthcare concerns given their line of work, e.g., scurvy.

While scurvy is almost unheard of in 2022, it was a major concern for sailors of the time period. Scurvy occurs when the body lacks enough vitamin C to make collagen. In turn, the disease causes an individual’s muscles to weaken, teeth to fall out, and sores to open all over the body.

In order to combat scurvy, British officers would mix Rose’s lime juice with alcohol (most commonly rum or gin) in order to entice sailors to drink it. And thus, the gimlet was born.

Many people believe that the drink was initially named after admiral Thomas Gimlette. Others believe that it was named after a specific tool used to drill holes into barrels of aging liquor. Either way, the gimlet of today got its start as medicine, of all things.

Why Use Vodka Instead of the Traditional Gin?

Gin can be an acquired taste. Good gin has a dry yet citrus-laden flavor that isn’t for everyone. In fact, gin is one of the least favorite distilled spirits in the U.S., with whisky and vodka being the most popular. In response, modern bartenders have developed a vodka-based alternative.

Originating sometime in the late ’70s/ early ’80s, the vodka gimlet goes hard on the vodka, lighter on the lime. While recipes will differ from bar to bar, the basic recipe remains the same.

To make a vodka gimlet, take two ounces of vodka, somewhere in the neighborhood of ¾ of an ounce of lime, some kind of sweetener (such as a simple syrup), shake with ice until properly chilled, then throw a slice of lime on the glass’s rim for good measure.

Variations on the Vodka Gimlet Recipe

In the 150-plus years since the gimlet’s inception, not a whole lot has changed. Sure, there are some subtle variations in the way that different establishments make their gimlets, but at its core, it is a simple drink. And as a simple drink, high-quality ingredients and a balance of flavors are critically important. Let’s take a minute to explore how the most popular types of gimlets are made.

The traditionally styled gimlet is a distant cousin to the more popular gin and tonic or vodka tonic. It has its roots in a classic sailors’ drink called grog which was essentially rum, water, and lime juice. Fortunately, the British Navy figured out a way to make the mixture more palatable by using gin instead.

Once the drink made its way shoreside, the classic gimlet took on new life with a formal recipe. Most recipes call for two ounces of gin for every ounce of lime juice. It should be noted that the original gimlet specifically called for Rose’s lime juice, a popular Scottish product in the 1880s.

The trick is to chill the gin using ice and a shaker before mixing. Simple mixing syrup can be used or omitted depending on the patron’s tastes. It’s not unusual to see some form of garnish, such as a lime wedge or cucumber, on the rim of the martini glass when served.

While canned gin and tonics are popular, great-tasting, high-end gin and vodka drinks in a can are still like the X on a treasure map – difficult to find but worth the effort.

The Southside was an early variation of the classic gin-infused recipe. Originating sometime in 1916, this gimlet derivative added club soda and mint to the proceedings, alongside gin and lime juice, to create a fizzy, refreshing version of the drink. Similar to a mojito, but with a gin base.

Cucumbers are a typical garnish for the classic, gin-based gimlet; you’ll often find the rim of your drink adorned with a hearty slice of cucumber. What you might not know is that you can further infuse your gin gimlet with the crisp, refreshing taste of cucumbers simply by putting ultra-thin slices right in the drink itself, or use cucumber-infused vodka. From there, it’s business as usual with a proportionate mix of gin and lime juice, with plenty of ice to make it even more refreshing.

Whether you prefer vodka, gin, or something else, the fun of the modern gimlet comes from garnish and the subtle addition of different flavors. Many herbs and flowers, such as lemongrass, pair well with the basic recipe, regardless of whether you use gin or vodka as the base. Try using mint leaves or basil leaves in the mixture.

If you remember our impromptu history lesson at the beginning of the article, gimlets are rooted in rum —grog, to be exact. In this day and age, there’s no reason to dilute the mixture using seawater, thank goodness. Instead, celebrate the rich flavor of the rum by suffusing it with lime juice and enjoy!

Why the Vodka Gimlet’s Popularity Is Surging Once Again

Clearly, the gimlet has a long and storied history, no matter what flavor and garnish you prefer. If you take look at the gimlet’s history, you’ll see that its popularity has evolved in cycles. The first wave was born of necessity in the 1880s. The gimlet experienced a resurgence during the height of the roaring twenties, then again in the optimistic post-war 1950s. Now, in 2022, the gimlet’s popularity is once again surging due in great part to its vodka-based variant.

For decades, vodka has been the number one type of alcohol worldwide. That’s because vodka is relatively easy to distill and plentiful across all countries and cultures. According to Sevenfifty.com, vodka generated more than $7.8 USD in global sales last year with a staggering 78 million cases of liquor changing hands.

In turn, vodka owes its popularity to its versatility. It is the ultimate cocktail mixer, able to take on the flavors and attributes of whatever it’s mixed with. Even the base liquid itself boasts a huge range of flavor notes and qualities, dependent on the brand.

That’s not the only reason that the gimlet’s fortunes are currently surging. Cocktails, in general, remain popular across the United States and beyond. According to Business Wire, liquor sales accounted for 25% percent of all global alcohol sales and 30% of the domestic market in 2021.

In other words, cocktails remain a significant driver when it comes to the alcohol market. As vodka is one of the most popular liquors in the world, it stands to reason that vodka-based drinks like the gimlet and cosmopolitan are currently thriving.

Also, consider the tastes of the current demographic of drinkers. With younger millennials well established, and older members of Generation Z reaching drinking age, the market has seen a number of shifts recently. Young drinkers are increasingly concerned with moderation, personal health, and ethically-sourced ingredients. The simple-to-make gimlet fits the bill when it comes to millennial drinkers and their tastes.

Where to Get the Best Vodka Gimlet

Vodka is ubiquitous, and a vodka gimlet is a simple drink to make. Stop into any neighborhood bar or even a large-scale corporate eatery, and chances are pretty good that the bartender will know how to make a gimlet. Scarcity is no problem when it comes to vodka gimlets. A better question is, “Where can I find the best gimlet possible?” The answer might surprise you.

The vodka gimlet has recently made the jump to the world of ready-to-drink (RTD) canned cocktails. High-quality craft cocktails in a can are widely available on many liquor store shelves, as well as via online channels. These vodka-infused products come in the perfect 100ml size and cost only $4.49 per drink as opposed to the in-house cost of a bespoke cocktail.

Gimlets are known for their fresh, chilled ingredients, and their RTD cousins are no exception. The best canned gimlet cocktails boast powerful 80-90 proof liquor, real lime juice, and notes of lemongrass.

If you’re having trouble locating canned craft vodka gimlets in your local grocery store or liquor store, you can order the best canned vodka gimlets by going to Post Meridiem or searching for it on your favorite online liquor store. So if you’re in the mood for a cold, refreshing cocktail filled with historical significance, head over to Post Meridiem Spirits to order yourself a pack or two.